The new solar array can be monitored in real-time through a web-based interface, so the lab can keep an eye on the amount of power produced relative to power consumed. 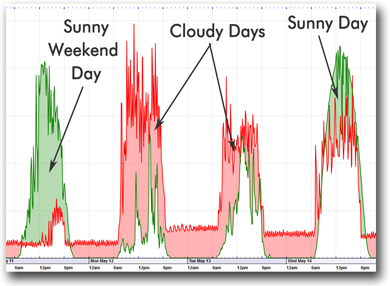 The figure above is from a four day period in May 2014.  Green is power produced and red is power consumed.  The chart shows a sunny weekend day in which the lab contributed a great deal of power to the grid, then two cloudy days when the lab drew power.  On the last day shown – a Wednesday – power consumed was roughly balanced by power produced over a 24 hour period.

One of our favorite aspects of the new power generation system is the community benefit: When we contribute electricity to the grid, ordinary utility customers use clean, green power without even knowing it!