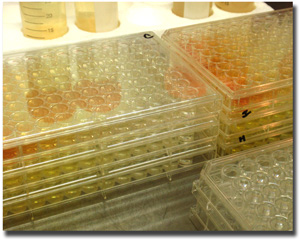 The MBC test determines the lowest concentration at which an antimicrobial agent will kill a particular microorganism.  The MBC is determined using a series of steps, undertaken after a Minimum Inhibitory Concentration (MIC) test has been completed.

MBC testing is useful for comparing the germ-killing activity of several antimicrobial agents at once.

Microchem Laboratory routinely runs minimum bactericidal concentration (MBC) tests for its customers. The laboratory is well versed in the science of antimicrobial testing in general, and applies this knowledge to each and every study we undertake.

If you are interested in MBC testing, you are likely in the research and development rather than claim substantiation phase. Microchem Laboratory has an excellent track record of helping companies move from screening to GLP product testing.